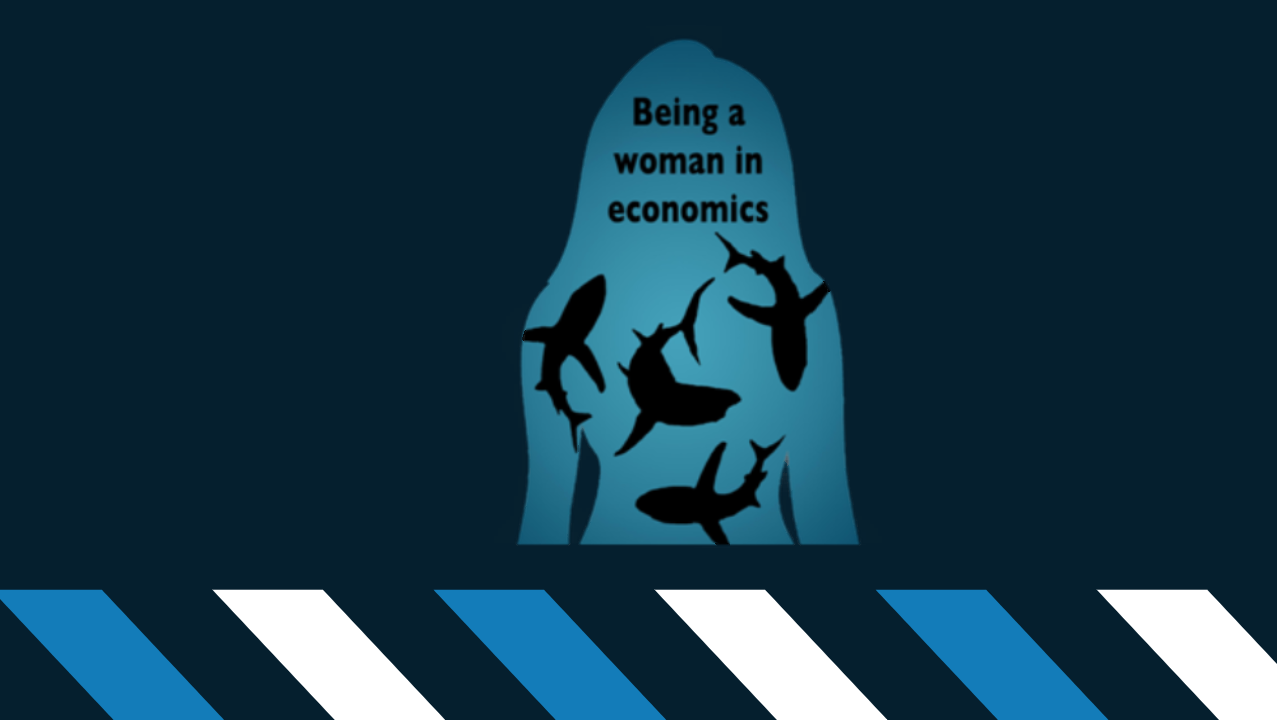 I’m scared. I feel like I’m throwing myself into shark-infested waters.

Do you think I’m talking about my overburdened workload? My newfound professional networks? My eagerness to get back to in-person learning, even though we’re in the midst of a pandemic?

No. I’m talking about pursuing my passion for economics when it seems crystal clear that a pervasive boys’ club culture won’t be welcoming me.

I started my workday reading Claudia Sahm’s blog post concerning the degrading experiences that she and some of her colleagues in top economics positions have experienced. I knew of the cultural problems within economics before reading the post, and that I didn’t fit the standard mold of who many consider an economist is or should be. However, until reading about Sahm’s experiences, I felt like I could tackle the gender obstacles that I would inevitably face. Now, that thought feels naive.

I’m a young undergraduate student, about to start my 4th year studying economics and finance in the United States. Being a joint business and economics student, I’ve heard of the sexist Wall Street culture and the lack of appreciation for women. I have prepared myself to face confidence, bluntness, or even aggression from men and am not deterred by it. I’m a student-athlete, so if anything, competition and grit are a part of my nature. I prefer to be assertive, forward and honest. But as a woman, I’m concerned those traits will be seen as bitchy and insistent by my male and even female colleagues throughout my career.

I know economists are not perfect; I certainly am not. The best way to grow is by recognizing and acknowledging what we’ve done wrong, and learning how to build from that. I personally have a lot to learn about economics, work culture, and life in general. I value constructive criticism and believe it’s crucial on my career path to becoming the best economist I can be.

I’d like to think that feedback isn’t personal unless you make it, but there is a fine line between constructive and demeaning. Hearing of Sahm’s experiences with senior macroeconomists in the United States, I’m nervous that I will need to deal with continual demeaning comments that could negatively impact my confidence, let alone mental health. Sahm made it clear that the demeaning comments over the years had taken a severe toll on her.

While writing this piece, I want to hide behind anonymity.

I know that people will disagree with what I say and that’s okay; I’d be deeply concerned if everyone thought the same way I do. Although, what’s not okay is the fear I hold of being deemed a “bad” economist because I’ve chosen to voice my concerns. What if I do experience the kind of discrimination or harassment Sahm describes? I hope that I also won’t choose to hide behind anonymity then, because these things need to be brought to light.

So to the senior economic officials, I ask that you accept the controversy and disagreement for what it is: a chance to learn. More importantly, disagreement can be an integral part of the evolution of modern economic thought. Alfred Marshall authored the first economics textbook and was the first economist to truly incorporate mathematics into economics. In his book, Principles of Economics, he had to place his mathematical reasoning in the appendix so that his colleagues would take the textbook seriously. At this time mathematics was widely considered unnecessary to economic reasoning. Nowadays, it’s impossible to discount the immense role that mathematical reasoning plays in economic analysis and policy.

Ideas, standards and norms change. Luckily, women and other minorities have plenty of ideas that can help progress the field.

We bring different voices to the table, ones that you might not agree with but may need to hear. Please don’t ignore the women in the room when they don’t exhibit traditional masculine traits, or begrudge them when they do. Please don’t shy away when you’re uncomfortable, lean in.

To tackle this problematic culture, I ask that you start by critically reflecting on your own biases and actions. That you start having some honest, even uncomfortable conversations with your colleagues, both men and women. Do this for the diverse young economists out there who are hoping to enter the field, but may be deterred by the hostile working environment alone.

The views expressed in WiE opinion pieces are those of the authors and do not necessarily reflect the opinion of the organisation, its partners, other members, or any other affiliated people and organisations. As ever-learning, critical-thinking people, these opinions are subject to revision and adjustment at any time. WiE welcome constructive feedback in the comments section below, and reserve the right to delete any comment deemed inappropriate, rude, irrelevant or abusive. All posts are for informative purposes only and, while they are accurate and authentic to the best of our knowledge, WiE accept no liability for any errors or missing information.

Why I don’t want to be defined as a woman economist,  but why it is important nonetheless