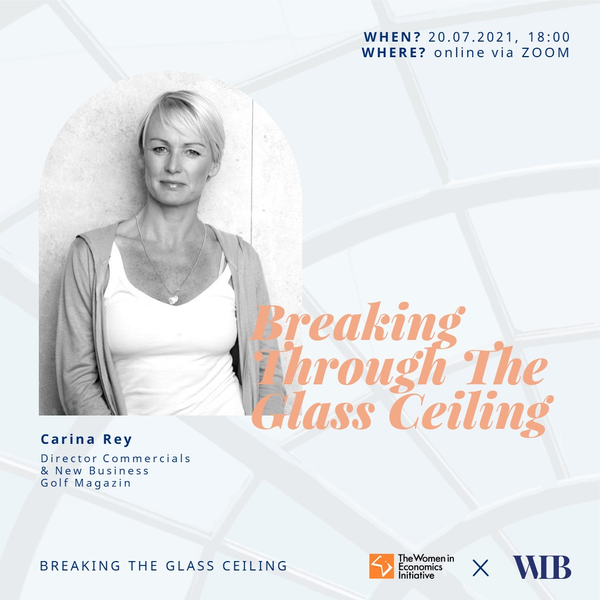 The Women in Economics Initiative and the Women in Business Program (LMU) have joined their forces to organize the speaker series “Breaking Through The Glass Ceiling” with women leaders from a wide range of industries and branches to inspire and motivate young women for their future careers.
Our goal of organizing the “Breaking Through the Glass Ceiling” series is to provide female leaders an opportunity to take a stance on gender equality and diversity in the economics and business profession and to support students in this field.
For Carina Rey, it all started when she studied political science, communications and media studies at Ludwig Maximilian University in Munich in the mid-1990s. Her first job then took her to the Burda publishing house in Munich, to the company’s press office. After a few years, she took the chance to move up to the front row: Press spokesperson for a direct bank in Munich (Advance Bank). In 2001, she seized the chance to spent a year in Boston, where she earned her master’s degree in journalism at Emerson College.
Back in Germany, she began working at Playboy when the Burda publishing house obtained the German license for the American men’s magazine. As deputy publisher, she was responsible for the title’s communications, marketing and new business until 2016, when she decided enough was enough with naked women and big interviews. After briefly “helping out” with the marketing of the German “Gault & Millau,” a well-known restaurant and wine guide originating in France, she started at the marketing division of Golf Magazin, a German special interest magazine focusing on golf, in 2019. This was a stroke of luck, as her passion also belongs to this sport….