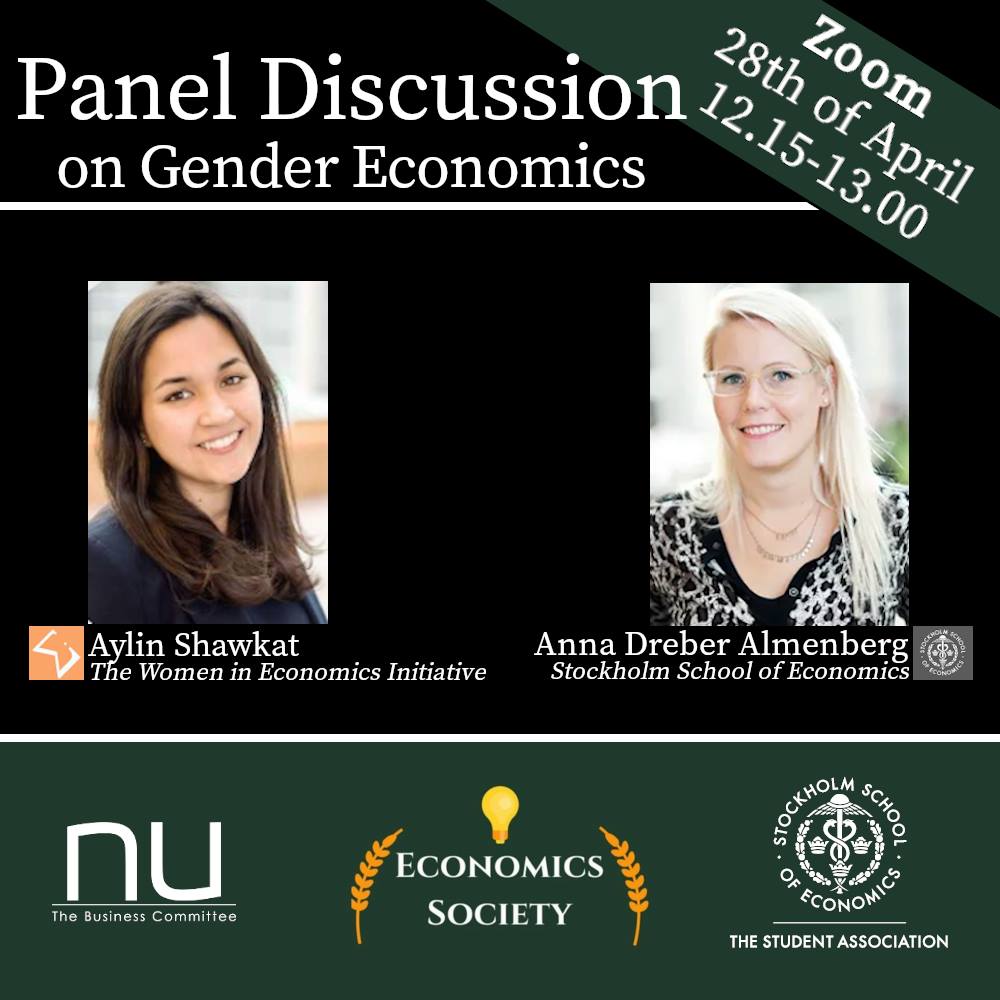 Women are seriously underrepresented in academia and especially in economics departments, but the extent of underrepresentation may still come as a shock to even the most knowledgeable of our readers. For example, one of the leading economics departments in one of the most gender-inclusive European countries, the Department of Economics at the Stockholm School of Economics (SSE) only got its first female professor in 2016.

We know some of the reasons for this underrepresentation; women economists are less likely to be cited, published and acknowledged for their work, and are held to higher standards compared to their male counterparts. Moreover, certain structural aspects of academia affect women and men differently. Until one secures a tenured position – a process that usually takes 7 years of probationary employment starting with an assistant professorship appointment – academia offers unstable and insecure employment when compared to many other professions.

One may need to be geographically flexible in their graduate program and job search, and it is becoming increasingly necessary to accept short-term contract positions after finishing a graduate degree instead of a tenure-track position. This level of job insecurity is arguably riskier for women’s long-term career prospects, especially if they don’t have access to adequate support in childcare and housework.

Thorough studies that highlight such barriers have been crucial in documenting the invisible hoops that female economists have to jump through. Meanwhile, talking to women economists themselves, both senior faculty members and students, is an important way of advancing our understanding of their thoughts and experiences.

In order to consider both the research and subjective experiences, WiE hosted an online discussion regarding gender in academia with Prof. Dr. Anna Dreber Almanberg, the aforementioned first female professor, together with WiE team member and recent SSE alumni Aylin Shawkat, on 28th April 2020. Moderated by the SASSE Economics Society, a student-led initiative for economics students, and drawing from both Anna & Aylin’s experiences, the discussion centered on certain specific aspects of the economics culture that make it more difficult for women to become successful economists.

Prof. Dreber’s research interests are wide-ranging, but her current focus is primarily on the replicability of scientific research. She is also the director of the MSc in Economics program, where she actively supports students in navigating their studies and early careers, providing valuable mentorship as a key role model for junior women economists

Academics are often seen as people who predominantly work independently, and one might therefore think that they don’t necessarily benefit from professional networks. In fact, such networks are as important to academia as to any other profession: inclusion in or exclusion from academic networks may dictate which conferences you will be invited to present your work, who will pay attention to it, which journals your research will be published in, and other factors all of which are prone to implicit biases. Recognising these issues, Prof. Dreber emphasised that when the most successful or visible economists create informal networks (commonly referred to as boys’ clubs) that (intentionally or not) exclude women, women economists find it much more difficult or even impossible to reach their full potential.

Strikingly, both participants reflected on their experiences of this type of exclusionary and elitist behaviour, and agreed that it contributes to a narrowly defined if not inhospitable culture that deters women from entering the profession to begin with. The effects aren’t limited to only women either; those with disadvantaged or minority backgrounds, including immigrants, might also shy away from or fail to benefit from this type of working culture. Participants then discussed some interventions that might help bridge this gap, such as simply having encouragement from diverse teacher and mentor representatives to junior academics to help them succeed.

However, this is not to say that it’s easy to provide conclusive evidence for the causes of or the solutions to underrepresentation. Closely related to Prof. Dreber’s research is the replicability crisis that the economics field, including gender economics, is suffering from.

According to Prof. Dreber, some studies in this field are underpowered, lack credible research designs and can be driven by the pursuit of particular results, rather than robust scientific methods. This implies that some previous empirical findings are specific to the study, and therefore not generalisable to support wide policy recommendations. As such, there is a need for continually testing different ideas, with credible research designs, in a replicable way to find out what works in closing the gender gap in academia.

The research and personal reflections taken together, it becomes clear that increasing women’s representation in economics requires a collective focus on (1) encouraging or at least not deterring young women from entering the profession, and (2) investing resources and time in women economists to support them in realising their career goals in the field. Policy-relevant, replicable research will be as crucial as ever in reaching these goals, as well as engaging a wider audience that is willing to listen and take concrete steps.

WiE would like to thank Prof. Anna Dreber for engaging so fully and openly discussing the gender-specific barriers in academia, and the SASSE Economics Society for hosting and moderating the session.

Why we need to discuss gender in a different way